On Monday, the South Australian royal commission released its tentative findings, which backed nuclear fuel storage and left the door open to further uranium mining and processing but came down against the use of nuclear power for electricity generation.

The findings said a nuclear storage and disposal facility would be commercially viable and South Australia could store nuclear waste as early as the late 2020s. It suggested the state set up a sovereign wealth fund “to accumulate and equitably share the profits from the storage and disposal of waste”.

The royal commission said uranium processing could not be developed in the next decade as a standalone industry as the market was already oversupplied and uncertain, but fuel leasing, which links uranium processing with its eventual return for disposal, is more likely to be commercially attractive.

India’s new policy clears the way for India to deliver on its plan to increase electricity generation from nuclear by over 300% from 7 gigawatts (GW) today to 31 GW in 2025. And India’s nuclear energy growth accelerates from there to a planned 63 GW of power to be generated by 2032 and 270 GW by 2050, at which time nuclear would provide 25% of the country’s electricity requirements. India’s nuclear energy growth plan rivals that of China; India has 21 nuclear reactors operating and 6 under construction – and negotiations are reported to be underway for the construction of at least 12 more – on the way to achieving these ambitious targets. – See more at: http://investorintel.com/uranium-energy-intel/india-removes-major-obstacle-to-growth-of-its-nuclear-industry/#sthash.rUHjvp0F.dpuf

The Danish government and Greenland have released a press release today confirming their agreement concerning the future mining and exportation of uranium from the Arctic island.

The foreign minister, Kristian Jensen, said the deal sent a strong signal regarding the co-operation between Denmark and Greenland and its Commonwealth in general.

“I am pleased that we have landed four important agreements concerning Denmark and Greenland’s co-operation regarding the mining and exportation,” Jensen said.

“It means that Greenland can continue in it efforts to expand its mining activities, while we adhere to our international duties and ensure that Greenland’s uranium exports live up to the highest possible international standards in terms of the peaceful and civil use of uranium.”

Four part deal
The four agreements in the uranium deal are:

– a general co-operation agreement regarding the specific foreign, defence and security policy issues related to the mining and exportation of uranium from Greenland

The parliaments in Denmark and Greenland are still to agree on certain aspects of the agreement, such as the safeguarding of nuclear materials. This is expected to take place sometime in early 2016.

Southwest Greenland is estimated to have the world’s largest deposits of uranium.

The uranium market has been due for a comeback since the 2011 Fukushima disaster, and many experts are pointing to a supply deficit by 2020.

However, in a report last week, Salman Partners said it sees uranium spot prices rising a lot sooner. Raymond Goldie, senior mining analyst at the firm, said spot prices are expected to rise from now until 2018 as a deficit in uranium eats through inventories.

“We refer to the day when security of supply becomes of concern to producers as the ‘pinch-point TM.’ We expect to reach the ‘pinch-point TM’ by early 2016, by which time we expect utilities to feel compelled to begin signing long-term contracts in order to ease concerns about security of supply, with those concerns – and spot prices – peaking in Q1 2018,” Goldie states in the report. Read full article

Unit 3 of China General Nuclear’s (CGN’s) Yangjiang plant in Guangdong province has been connected to the electricity grid. The reactor is expected to enter commercial operation by the end of the year. Three more are planned. Read: http://www.world-nuclear-news.org/NN-Third-Yangjiang-unit-connected-to-grid-2010154.html

Finkel is president of the Australian Academy of Technological Sciences and Engineering. He also heads the classroom resources company Stile Education and chairs the Australian Centre of Excellence for All-Sky Astrophysics.

Toro Energy Limited (ASX: TOE) Managing Director, Dr Vanessa Guthrie, presented to the Sydney Mining Club on Thursday 1 October 2015 on the critical role for uranium in a clean energy future and the opportunity for Toro to participate in that future. Read story

Kyushu Electric Power confirmed on Monday that Sendai nuclear power unit no 1 would be restarted yesterday and be generating electricity by Friday. Full operation is expected in early September.

It marks the first Japanese restart since the Fukushima nuclear disaster in early 2011. More

Pretty exciting update from ASX: GGG who now have:

By‐production of  U3O8, lanthanum and cerium, zinc and fluorspar 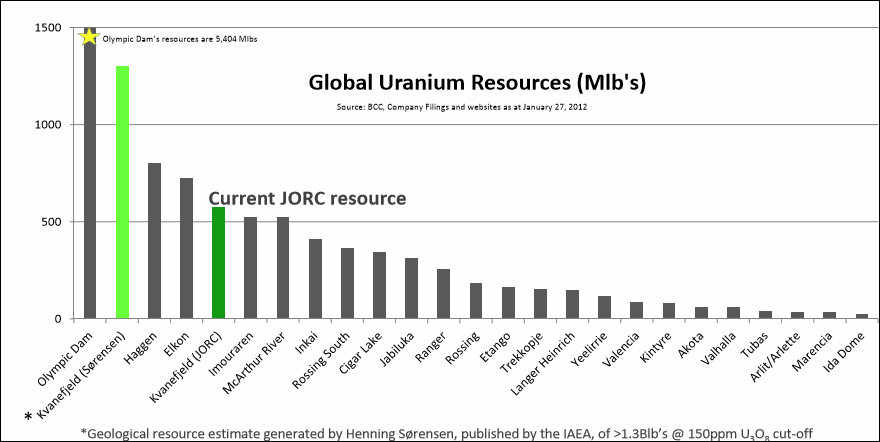 It seems possible that GGG Kvanefeld deposit will equal or move ahead of ASX: AEE‘s vast Haggan plus Reguibat uranium resources.

This coupled with GGG’s huge (world largest ex-China) rare earth resources puts GGG in an attractive position now that the Greenland elections are over with a pro-mining govt. taking the reins. This article is worth reading http://www.proactiveinvestors.com.au/companies/news/59662/greenland-minerals-and-energy-to-update-resource-estimate-59662.html especially after you see this image: